The Japanese Social Security System in Transition : An Evaluation of the Current Pension Reforms

Of all the industrialized countries, Japan has the largest and most quickly growing concentration of people aged 65 and older. The sharp increase in the aged population will have immense economic and social consequences, especially in the pension and health care arena. As in many other countries, the public pension system in Japan, which is basically financed on a pay-as-you go basis, i.e. current workers pay for current retirees, faces severe financial pressures. Consequently, the revamping of pension arrangements has become an urgent issue occupying the top of the political reform agenda in Japan. The government is striving to secure financial sustainability of the public pension system through a number of parametric reform measures such as the curtailment of earnings-related benefits, an increase in the entitlement age and changes in the system of indexing benefits. At the same time, it hopes that these benefit cuts can be offset through a promotion of occupational pension schemes. The paper evaluates recent and proposed pension reforms in regard to the economic, demographic and social background of the country. The analysis of the public pension system centers on issues of financial sustainability, distributive effects, minimum income adequacy and political risks. Since the official policy aims to strengthen occupational pensions, this study takes a closer look at their current diffusion and evaluates the (possible) changes in their regulatory framework. More general conclusions about the possible future outcome of Japanese pension reforms are derived by comparing the Japanese case to pension reforms in the United Kingdom. 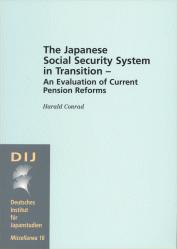