Japanese urban planning (toshi keikaku) historically took place as a “top-down process” from administration to citizens. Because of the influence of Western countries, however, and the strengthening of democracy, since the 1960s the Japanese understanding of urban planning has changed to become a “bottom-up process” called machizukuri. Field investigations (scientific observation, questionnaires and interviews) in two wards of Tokyo, Suginami and Setagaya, analyse and categorize the great variety of citizens’ participation projects in Japan. In a comparison between the two planning cultures, the main difference can be seen in the fact that participation in Germany is still legally very restricted and aims at results, whereas most Japanese machizukuri projects take place on a self-generated basis, and the learning process and conviviality are often just as if not more important than results. To realize an effective cooperation between all actors in urban planning, in both Germany and Japan, further changes and improvements in participation possibilities are necessary. The administration has to share competence, and citizens have to take more responsibility instead of relying on their traditional comfortable role as consumers. The final chapter makes some proposals, regarding the way in which each country can and should learn from the positive experiences of the other. 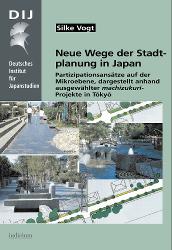