The total public funding allocated in Japan for public works each year is enormous when compared to what other industrialized countries generally invest in the improvement of their public infrastructure. Vast amounts of public funds are used to build roads, dams, community centers and other public facilities, taking into account not only the regular budgetary expenditure, but also the large economic stimulus packages the Japanese government has put in place on a nearly annual basis throughout the 1990s. Considering the widely varying impacts of infrastructure investment, not all of them positive with regard to demand, efficiency and environmental concerns, a fundamental question arises as to who decides which projects this money is spent on. To answer this question, the book provides an analysis of the formal decision-making process and the informal influence structures characteristic of political decision making in the field of public works in Japan. All levels of government, i.e., the central, prefectural and local governments, are covered by the study, which employs a network approach in order to take account of all relevant actors. The analysis focuses on the annual budgetary process, which is the arena in which the use of public funds for particular infrastructure programs and projects is actually authorized, and on the medium to long-term planning instruments for various types of public works. The results are analyzed from three perspectives: the respective roles of bureaucrats and politicians in policymaking, the degree of centralization of the political decision-making process, and the effects of specific political institutions on the mechanisms of political decision making. 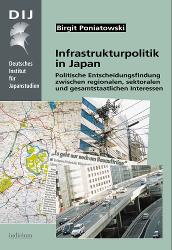